“After their acclaimed debut ‘The Wood’ in 2013, the trio lifts their lyrical style to perfection with the new album ‘Gentle Giants’ and develops a subtle depth, in which there is so much to discover.” (Traumton) 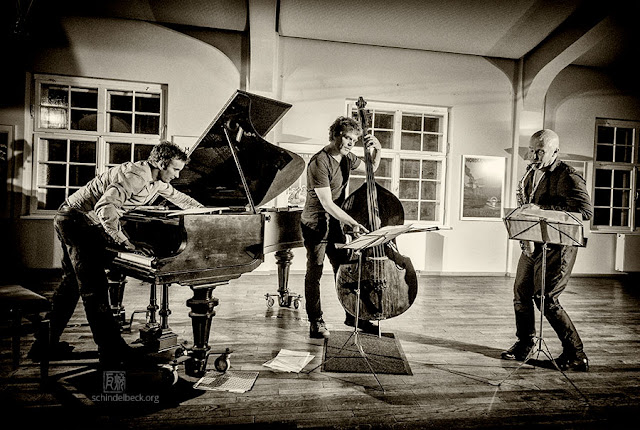 SWR Jazz award for Hayden Chisholm (2014)
This exceptional Cologne based trio presents the second album GENTLE GIANTS (Traumton / Berlin).
After their highly acclaimed debut THE WOOD in 2013, the three lift their lyrical style to perfection with the new album and develop a subtle depth, in which there is so much to discover. In 2018 they received the famous German ECHO Award for their new Album GENTLE GIANTS. Since 2013 they have been touring in all over Europe, Russia and Africa.
On board: Sax player Hayden Chisholm – SWR award winner originally from New Zealand, Cologne based piano player Philip Zoubek from Austria - winner of the WDR Jazz award 2020, and Cologne bass player and double ECHO bass award winner Sebastian Gramss. Their appealing and ambitious approach harmoniously brings together refined structures and improvisations, appealing to both – mind and soul.
SLOWFOX – recently celebrated as „Newcomer of the Year“ at Jazzahead Festival – embodies an exciting balance between appealing melodies and sophisticated sound aesthetics and creates a unique kind of a “Melodic Avantgarde” at the highest level of playfulness.